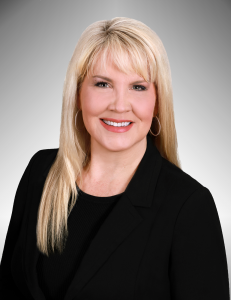 Laurie A. Leenhouts serves as President of Title Partners and manages the operations of the agency. With Laurie’s experience in running high-volume operations with high margins in a competitive industry, she plays an instrumental role in driving strategic growth and expanding the agency’s footprint.

Prior to joining Title Partners, Laurie most recently served as President of the Texas division of one of the largest real estate settlement service providers in the nation, where she managed operations across the state, facilitated training programs for her teams, and was able to ensure timely and smooth escrow transactions for her customers. She is a licensed escrow officer in the State of Texas and has a deep understanding of the intricacies of the title industry. Previously, she served in a variety of roles including escrow officer, executive vice president, area manager, chief operating officer and lead business operations analysts for several Texas-based title companies.

Laurie has earned her Six Sigma certification and is a Lean Six Sigma Champion. She is also a Texas Land Title Association (TLTA) member and PAC supporter. She received her Master of Public Administration and Bachelor of Arts degrees from University of Texas at Arlington.

Return To The Team